The website Picture the Past has provided images of a drill hall in Ashgate road, believed demolished in the 1980s. The offices remained standing at the time of the most recent photograph, 1993.

The 3rd Administration Battalion, The Derbyshire Rifle Volunteer Company (RVC), was formed in 1861. Its sub-units were the forerunners of the present 575 Field Squadron (V), Royal Engineers. Their current Drill Hall, Wallis Barracks was opened in 1898, reported in The Times on Thursday Sep 29, which declared: LORD ROBERTS yesterday visited Chesterfield to open a new drill-hall for the local Volunteers.

Photographs used with permission of
Picture the Past.

Detail from above photograph

Central School and Drill Hall, photographed in the 1930s. 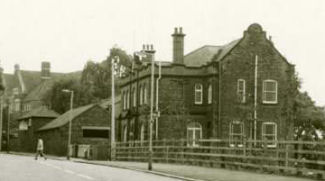 Drill Hall offices, 1993 - Chesterfield Photographic Society
© All material is copyright - refer to the Terms of Use