The Portland Artillery Volunteer Corps began in 1860 and nine years later, a Volunteer Drill hall was built. By 1893, there was a Volunteer Artillery Brigade consisting of three companies  400 men - in the town, although the numbers fell in the coming years because of more stringent regulations. The Drill Hall was enlarged in 1900. (Portland Year Book, 1905)

The Volunteer Drill Hall, Easton Lane, Portland, was erected in 1868. Previous to 1868 one part of the local corps drilled at the Clifton Hotel, the Grove, and the other part at the old school-room, Straits, now the Reading-room. The Drill Hall was considerably enlarged and improved in 1900. It now consists of a large and spacious drill hall, the latest additions being an armoury, reading-room, recreation room, and other admirable accommodation for the service of the Corps. The facade to Easton Lane is a very handsome elevation in dressed Portland stone, with castellated towers, &c. The structure is one of the most picturesque and attractive on the Island. Attached to the Drill Hall on the south side is an Instructor's residence. (Portland Year Book for 1905)

The Drill Hall is extant. Paul Benyon has informed us that for many years it was used as a store and offices for the people who looked after the local RN Married Quarters, and a part of it was also used by the local army cadets corps. He suggests that since the Navy left the Island, one of the Portland stone firms may now be using it as offices. (We would welcome confirmation of its current use.)


The extract from the Portland Year Book and the photograph of Portland Drill Hall are reproduced by permission of Paul Benyon. We are very grateful for his help. 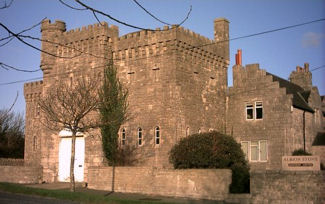