N Midland Divisional Telegraph Coy RE B and I Cos. 1st Volunteer Battalion Prince of Wales's North Staffordshire Rifle Volunteers

The Drill Hall, College Rd, Hanley was opened by Lord Methuen on March 21st 1903, according to a report in The Times.

Kelly, 1904, gives B and I Cos. 1st Volunteer Battalion, Prince of Wales's North Staffordshire Rifle Volunteers, who 'have their headquarters in the town [at Town Hall yard, and Market place (Stoke)]' but 'the Drill hall is in Victoria road, Hanley' where they are listed as B, K and O Cos. Also, he lists 'Shropshire & Staffordshire Royal Garrison Artillery (Heavy Artillery), Barracks, Victoria square, Hanley.'

There is a reference to the Drill Hall in the 1907 Staffordshire Sentinel, 'Business Reference Guide to The Potteries, Newcastle & District':

'The Temperance Hall in High-street is much used for public meetings, which are also sometimes held at the Volunteer Drill Hall, a commodious building in Victoria-road, Shelton. This hall is the headquarters of the 1st V.B. North Staffordshire Regiment, which is commanded by Colonel Dobson. Captain A. E. Blizzard is the commander of the Hanley detachment ("B," " K," and " 0 " Companies).

The Artillery Barracks are close by in Victoria-square. Lieutenant-Colonel Favell commands this corps, and Major H. E. Bishop is the headquarters staff officer.' 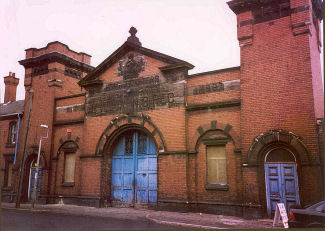 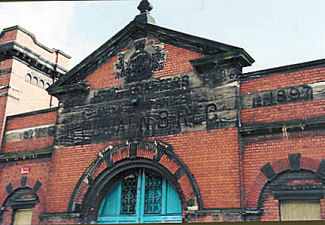 Portico - Victoria Road
Thank you to Richard Howells for this photograph. 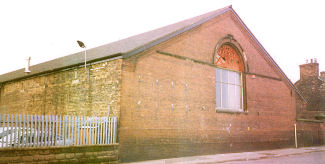 Rear aspect of Victoria Road ?
© All material is copyright - refer to the Terms of Use