The Headquarters of the 5th Volunteer Battalion South Wales Borderers were established at Newtown in or around 1897.

It is described in The Story of The Seventh 1908  1914 thus: In 1897, authority was granted to Major Edward Pryce Jones, Member of Parliament for the Montgomeryshire Boroughs, to form a battalion of Volunteer Rifles, in the County of Montgomeryshire, to be known as The 5th Volunteer Battalion South Wales Borderers.

The Headquarters were established at Newtown, and two companies were also raised there; in addition the Newtown Silver Band enlisted en bloc.

After the Territorial and Reserve Force Act came into force on 1st April 1908, drill halls were built in several Montgomeryshire towns. Newtown was one of them.

A building on Back Lane bears a legend painted on the brickwork. It says, in capitals, The Headquarters of the 5th Vol Battalion South Wales Borderers. It is just possible to distinguish a sign which we believe to be newer but of inferior quality, saying Headquarters 7th Battalion Royal Welch Fusiliers.

The 5th volunteer Battalion SWB contributed men to the Volunteer Service Companies of the SWB during the Boer War and in 1907 their strength was recorded as 549. In 1908 they became the 7th (Merioneth and Montgomery) Battalion RWF (TF). In this new battalion, the headquarters and B company were at Newtown.

Though the painted legends confirm a military connection, we are not yet certain of the provenance of this building. It is possible that as in other places, the Headquarters was merely rooms while the troops drilled in a barn, stables, a school or the open air. The interior does not yield any further insights.


Thank you to Clive Hughes for the additional military information.

We are very grateful to Mike for the photographs.

Headquarters is left hand building, next to the Court and Police Station 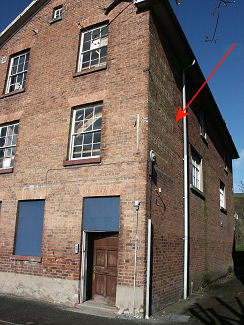 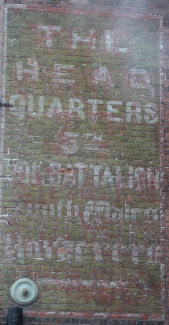 Painted legend. View enlargement
© All material is copyright - refer to the Terms of Use