'H' Cambridgeshire
ds 'A' Squadron Suffolk Hussars
The Shire Hall, built in 1820, is a structure of brick, consisting of a centre and two wings; the former contains apartments for holding the courts and public meetings; the north wing is appropriated partly as an armoury for the H Company 3rd (Cambridgeshire) Volunteer Battalion Suffolk Regiment, and the south wing forms a police station; the hall will hold about 250 persons. At Fore Hill is a reading-room for the public and volunteers. (Kelly, 1896) A Militia barracks also stood in Silver street.

Apparently the Regimental HQ, Armoury RQMS Office and Stores, stables, cells and guard room can be seen on Silver street. Quarters for the RQMS and the Sergeants' married quarters are on The Range, with the Infirmary at the end. The married quarters for NCOs and other ranks are on Parade Lane. The former Parade Ground is now the car park on Barton Road. 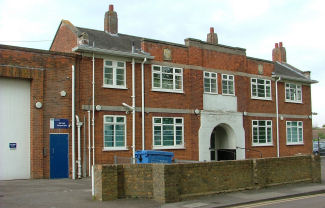 Barton road Drill Hall
Photograph: Ray Youngs
© All material is copyright - refer to the Terms of Use