Using current street names, the Volunteers Drill Hall stood at the Shaws Road end of Greenwood Street. Its site is where the Altrincham Conservative Working Men's Club (built February 1887) now stands and it was adjacent to the 1814 Unitarian Chapel (demolished). It was a relatively small building.

It is likely that the Drill Hall was demolished in 1886, when Greenwood Street was developed. The area between Altrincham hospital (built 1877) and the drill hall was the drill ground.

There is a narrow building at that point on the 1852 Board of Health Map but it is not numbered or named. It may possibly have been stables. There are four cess pits close by.

Morris's Directory 1874 refers to the Rifle Volunteers (12th Cheshires) in Altrincham and lists their Orderly Room on Bowdon lane. George Rodger was the Captain Commandant.

The drill hall in Hale was demolished in 1972 and replaced by an hotel, a supermarket and offices. Hale is adjacent to Altrincham.


Thank you to David Miller of the Altrincham Historical Society for his information about the history of the site. 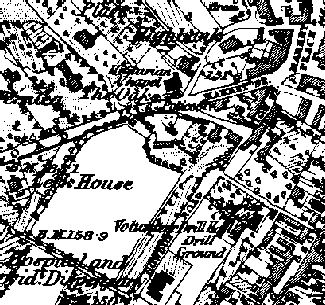 Image produced from the www.old-maps.co.uk service with permission of Landmark Information Group Ltd. and Ordnance Survey.
© All material is copyright - refer to the Terms of Use