Kelly 1914 records that, 'The A and [two sections of] B companies of the 7th Territorial Force Battalion The Cheshire Regiment are stationed here.'

His listing continues: 'The Drill Hall, Albert street, erected in 1905, at a cost of £2000, with dwelling house for a sergeant-instructor; there are offices and reading rooms, and a fine drill hall 100 feet by 50 feet.'

The drill hall was erected in 1904 on land donated by Sir William Shakerley and built by T and E Cooke. It comprised drill room, armoury, stores and recreation room, along with living accommodation for the Sergeant Instructor and his family. Because the premises were rarely used for military purposes after the Second World War, the hall passed into use for social occasions and sports. For that reason, The Congleton Chronicle declared that "its demolition spells a definite loss to the town", though it predicts that the car park "will be of particular use once the inner relief road has been built." (Congleton Chronicle, 6th August, 1976.)

The building was demolished in 1976. The site was initially a car park and is now a supermarket.

We are very grateful for the considerable help given by the late Mr A J Condliffe, Proprietor of the Congleton Chronicle, in sourcing material from the newspaper's archives.

We would like to thank Mr Frank Worrall, of Congleton, for sharing his memories of the drill hall and supplying background information.

We will be adding extensive archive material on the story of Congleton Drill Hall in the near future. 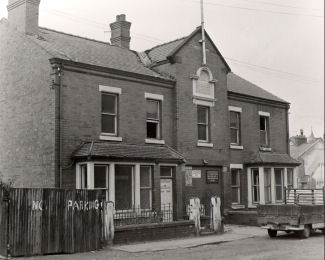 Photograph from the Congleton Chronicle,
reproduced with permission.
© All material is copyright - refer to the Terms of Use