The B Company of the 1st Volunteer Battalion, Duke of Cornwall's Light Infantry, has an armoury at Wheal Gurry. (Kelly, 1893)

According to the 1967 OS map, this appears to have been a long triangular site on North Roskear Road and seems much more like a barracks. The old stone buildings on the east end of the site appear to have now passed into private ownership. The centre of the site is now used by an industry - some sort of bus or truck depot. Now (2007), just the eastern third of the site is occupied by a more recent cream coloured drill hall which is still used by the Light Infantry. We do not know the age of the more recent drill hall.
Thank you to Charles Fair for the photographs and observations on these premises. 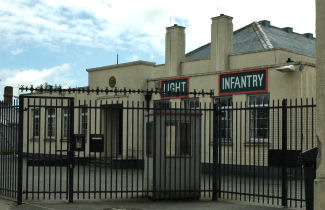