The Armoury and Drill Hall for the Herefordshire 1st Rifle Volunteers was at 30 Widemarsh Street in 1886, but not there in 1882. By 1895 that address had become the Theatre Royal, later to be the Garrick Theatre and then the County Library headquarters. The site is now covered by the multi-storey car park.

It is assumed that this Drill Hall was succeeded by the Friars street Drill Hall.


Friars street
The 1st Battalion Herefordshire Regiment, Territorial Force, comprising 8 companies, has its head quarters at the Barracks in the city of Hereford; the drill hall in Friars street, erected in 1891 for the use of the local companies, is a building of corrugated iron, licensed for dramatic performances, and will seat 1,200 persons. Here also are the depots for the Royal Army Medical Corps and Army Service Corps of the Territorial Force. (Kelly, 1913). In 1895, this drill hall was recorded as seating 700 people. (Kelly, 1895)

Jakeman & Carvers 1890 Directory of Hereford also records the use of Friars street.

The Drill Hall in Friars street stood on the west side of the road, adjacent to Watkins Imperial flour mill (noted 1895) and other industrial premises, including a haulier, a photographic apparatus manufacturer and a maltster. It seems to have been an extensive site which, as appropriate for a logistics depot, appears to have been served by a branch from the main railway line. The site includes the location of the present Military Club.

In "A History of Theatres & Performers in Herefordshire", Robin Haig describes theatrical events held at the Drill Hall in Friars Street from 1894 onwards, initially to raise money for the Drill Hall Building Fund. The building had the advantage of a large stage. The first events were amateur theatrical performances, but during the next year, 1895, the D'Oyly Carte Opera Company performed in the Drill Hall. Other entertainers included Professor Crocker's Educated Horses (and the fact that the stage could contain 30 horses is an indication of its size) and Norton B Smith, a horse trainer who claimed to be able to subdue "...your kickers, runaways, gibbers, plungers, fighters ... and man-eating stallions...".

According to Robin Haig, the drill hall continued to be a well-used venue; 1900's performances included 'Tannhaüser' with sixty people in the chorus, 'Charley's Aunt', a visit from Albert Chevalier (music hall artiste); in 1901 the D'Oyly Carte returned and the drill hall hosted other large shows.

The Friars street Drill Hall was clearly typical of many drill halls: a popular venue, providing valuable public space which was well used by the town.

A large corrugated iron building now stands on the site of the Drill Hall. This is a bus depot, which was purpose built and opened in April 1925 by the Birmingham and Midland Motor Omnibus Company (Midland Red). The building was extended in 1930 and again in 1941. The Drill Hall itself never formed part of the depot complex. Photographs show the depot being built on a cleared site.


Militia Barracks, Harold street
Further information from Manu Forti - a history of the Herefordshire Regiment 1860-1967 by Lt.Col. T J B Hill MBE KSLI tells us that the Headquarters at Hereford comprised houses acquired in 1890 by Maj. Scobie (A Company), Capt. Morris (H Company) and Brigade Surgeon Lt. Col. Giles (Bearer Company). They were purchased by the Battalion under the Military Lands Act 1892. The site was a square, the buildings on one side contained the orderly room, stores, reading and lecture rooms and the Armourer Sergeant's house. On another side there was a strong building for the Armoury and Headquarters Company stores. Opposite was a large drill shed, 120' x 60' of corrugated iron and paid for by Maj. Scobie, Capt. Morris and Lt. Col. Giles. The barrack square was enclosed by a brick wall, and the Bearer Company had an iron building for medical stores.


The barracks referred to are presumed to be the Militia barracks on Harold street. The Barracks, dated 1856, is now in use as the County Record Office. A modern TA centre stands on the former parade ground.

The Volunteer (public house) on Harold street is a reminder of the area's military past.

We are grateful to Herefordshire Libraries for permission to reproduce the two archive photographs of the Friars street Drill Hall in 1902.

The photograph of the motor car rally at the drill hall is copyright of Derek Foxton Archives and we are grateful for his permission to reproduce it.

We are very grateful to Shaun Simpson of First Midland Red Buses for explaining the history of the Friars street site after the Drill Hall was demolished.

We are very grateful to Andy Taylor, Assistant Curator of The Herefordshire Regimental Museum, for the interesting photographs of Herefordshire's Drill Halls around 1910. 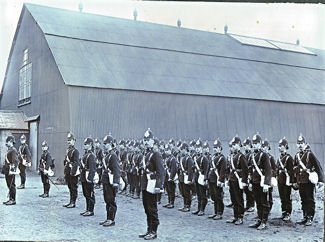 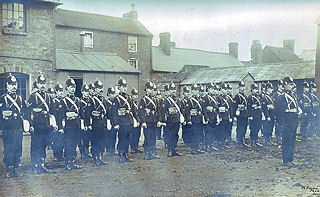 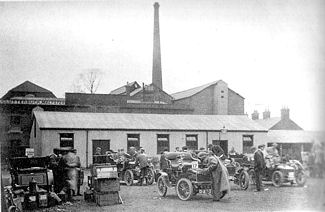 Harold Street Barracks circa 1910. Click to enlarge
Photograph: Herefordshire Light Infantry Museum Trust
© All material is copyright - refer to the Terms of Use