These references from Kelly 1913, which also gives different locations for F and H Companies.

Sittingbournes Drill Hall, in East Street, erected in 1892 [according to Kelly 1913] is an edifice of brick, with stone dressings, and is used as the recruiting office of the district for the Regular Army and the Territorial Force, and is also licensed for theatrical performances, dancing, concerts, and will hold 500 persons.

"4th Batt The Buffs" is still visible on the apex.

Records show that the building has been used by the community in the past. For example, according to the Sittingbourne District Directory for 1908/9, there was a Volunteer Club held in association with the Volunteer Battalion, (E Co, Ist VB, Buffs) in which a club room was open for reading and games. As with many other drill halls, the drill hall itself was available for dances and concerts on application to the Sergeant Instructor.

Now used as a church, there are plans (November 2006) to replace the frontage with a modern design. Whilst admirable in saving the building, it obliterates the remaining signs of its previous military use. 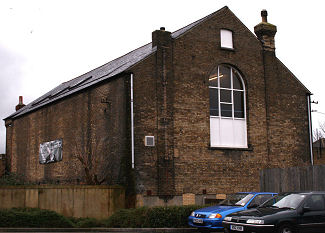 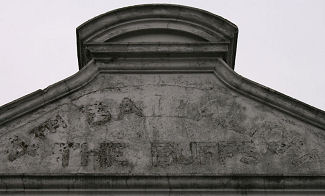