The construction of the Drill Hall was funded by public subscriptions, due to the influence of Major F R Briggs, who was the son of the first Mayor. It was opened as one of the Jubilee memorials of Queen Victoria's reign.

The site of the Drill Hall in Granby street is now a car park, poignantly close to the Carillon, Loughborough's War Memorial.

We are very grateful to Dr Sue Jackson for the photograph and for the contemporary map and other documents which she supplied.

The site of Loughborough's WW1 Drill Hall is overlooked by its Carillon war memorial. 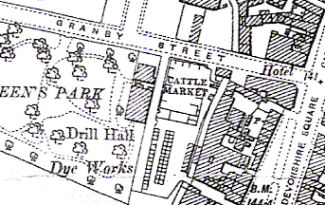