The building is of blue stone, in a castellated style, and consists of two quadrangles, the first of which was erected in 1858, at a cost of £3,640; over the gateway is a bandroom; in the centre is the parade ground; a large drill hall was erected in 1911; at the sides are quarters for the permanent staff and stabling; the second court was added in 1872, and includes a reading room; a small field adjoining is used for drill purposes. (Kelly, 1913)

There was also an armoury for 1000 rifles, a guard room, three cells for prisoners and stores. According to Pevsner, this building is of 1858 and 1872. Perhaps by Goddard. It is castellated and very forbidding. Inside, an impressive courtyard.

During the Great War, the drill hall was loaned for use as an Auxiliary Military Hospital between 19th November 1914 and 28 February 1919. It contained 60 beds and 1232 patients were treated there. Photographs exist showing the room decorated for Christmas, 1918, with flags, floral displays and paper chains. Injured servicemen have gathered round a billiard table and a card table, attended by nurses ans doctors.

A brass plaque placed by the British Red Cross Society on an interior wall commemorates the staff of VAD Lincoln.

Members of the local community recall the drill hall in use for social occasions, such as pop concerts. Apparently Tom Jones, Screaming Lord Sutch and The Scaffold have all performed there. It was also used by the local school for sports such as badminton.

The main building now houses offices, but there is a large function room on an upper floor. In the entrance archway, the rack provided for soldiers to deposit their rifles is still there.

The drill hall itself is now a listed building, used by Marilyn Swain Auctions. It has some modern interior partitions, but its roof trusses and window lights are exposed. The original wooden parquet floor remains. The building as a whole is well cared for. Adjacent buildings forming the sides of the quadrangle are in use as commercial offices.

Many thanks to John Munro of Marilyn Swain Auctions for showing me around the drill hall, taking the overview photographs from the gallery, sharing memories and loaning me photographs of its conversion. (GMR, January 2006)


Wharf road
Kelly lists Wharf Road in 1896. A site visit in 2006 found no evidence of military premises on Wharf Road.

Drill hall set within the quadrangle of the barracks 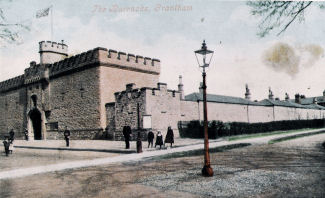 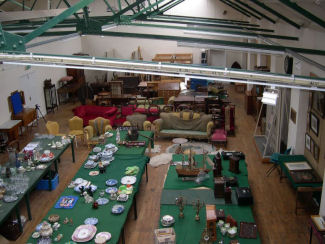 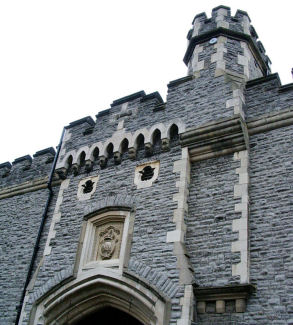 Gatehouse in 2006, viewed from quadrangle 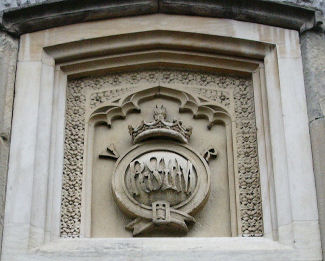 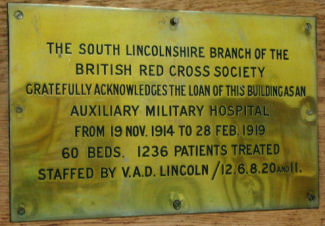 Plaque commemorating use of the Drill Hall as an Auxiliary Military Hospital during WW1.