The Times, Monday May 26th, 1890: Mr. E. Stanhope opened a new Volunteer drill hall at Lincoln on Saturday. The hall has been presented to the Lincoln Volunteers by Mr. Joseph Ruston, a former M.P. for the city, and the total cost is about £10,000.

Lincoln Drill Hall was built in 1890. Through most of the 20th century it was used for military and police training, and by the community for dances, bingo and concerts, including some famous jazz and pop bands, memorably the Rolling Stones. Its funding was initially by Joseph Ruston, a local industrialist and later by the Ruston Drill Hall Trust. By the 1990s it had begun to fall into disrepair and was closed in 1999 because its electrical system was unsafe. After pressure from the community, the decision was taken not to demolish it, but to invest in its refurbishment and it opened in 2004 as an arts and community venue.

The orientation of the building has been reversed. The original main entrance was not sympathetic to accessibility and performance access requirements, dictating the construction of a principal access at the rear. This created the opportunity to retain the existing front facade intact, while providing a new entrance of steel and glass, exposing the aspirations of the project.

Lincoln Drill Hall is an exciting example of the conversion and regeneration of an historic building. Nearly 120 years after it was proudly opened by Stanhope, the Secretary of State for War, it has been returned to its community, given a exciting new use and a future. It is once again a building that commands attention and respect. The architects of both its inceptions deserve acclaim.


We are very grateful to Phil North of Lincoln City Council for all the material which he sent for the Drill Hall Project.
Broadgate Drill Hall - front elevation 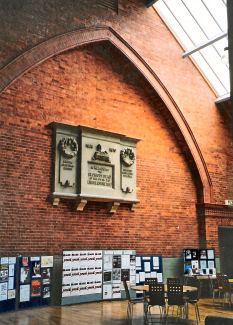 Detail of plaque above front entrance. 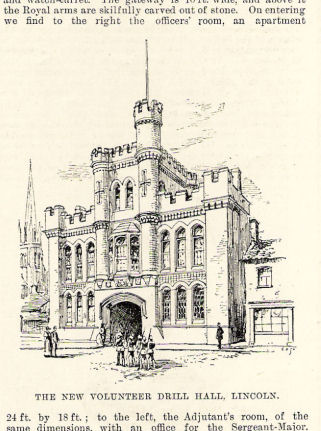