Apparently it was a fine building. The 1890 History of Great Yarmouth records the cost at £1,400, and states that the south elevation presents a picturesque appearance, and attached are the offices, a sergeants residence, and an armoury, &c. Kelly described it in 1912: The Drill Hall of the Great Yarmouth rifle detachment of the Territorial Force, erected in 1867, on the York road, covers a space of ground 147 feet in length by 65 feet in width; the large hall is roofed in one span with elliptic ribs, and is lighted chiefly by a skylight at the apex of the roof.

We believe that the Drill Hall is still used by the community, for example, for sports.


Nelson road
According to a contemporary report, On the 28th September, 1858, a Garrison Artillery unit known as the 1st Norfolk Artillery Volunteers, was formed in Great Yarmouth and placed under the command of Captain Samuel Charles Marsh, a former Mayor of the Borough.

The Batterys headquarters were at the Corn Hall, in the rear of the Dukes Head Hotel, and for some time it had been proposed to erect an artillery drill hall on a piece of land abutting on St. Peters Plain to the north of the Infantry Drill Hall, and to the east of the old Mount, where the General Hospital once stood; but the battery declined the offer of the lease, and the land was handed over to the school board.

Later the Battery acquired a modest site in the middle of the bleach which is bounded by houses fronting Nelson Road Central and Albion, Crown and Russell Roads, and there the Drill Hall was erected. It was enlarged in 1906.

A document from 1880 states: We find they had built for themselves a Drill Hall in what is now called ARTILLERY SQUARE, (off Nelson Road.) The members of this smart little Corps, mustered at their pretty new Drill Hall, situated on a large site, lately used as a bleach. The hall is 73ft. long by 40ft. wide and has Orderly and Committee Rooms attached, each 17ft. by 13ft. Of red brick with York stone dressings. Architect: Mr. Arnott, Hall Plain, Gt. Yarmouth.

Its dimensions were noted by Kelly. The Territorial Artillery Force Drill Hall, Nelson road, built in 1881, is 65 feet long and 35 feet wide.

Nelson Drill Hall in Artillery Square is in use by First Move as an advice, training and support centre for unemployed people. We are grateful to Tina Siragher at First Move for the information she contributed, which we have quoted above.

The Territorial force stationed in Great Yarmouth comprise the 1st Norfolk Battery Royal Field Artillery, the G and H Companies of the 5th Battalion Norfolk regiment and B Co. 6th (Cyclist) Battalion. The Artillery butts are on the North Denes. (Kelly, 1912) 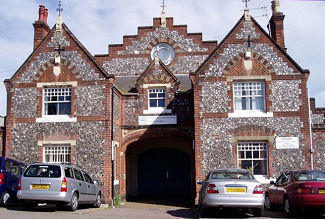