Norwich is the head quarters of the Norfolk (The Kings Own Royal Regiment) Yeomanry, and of the A Squadron of the Regiment.

Unless otherwise credited, all unit locations listed above are from Kelly, 1912.

The Volunteer Drill Hall in Chapel Field road was opened in [October] 1866 by His late Majesty King Edward VII and Queen Alexandra, the Prince and Princess of Wales, and is a large building of flint and red brick, in the Castellated Gothic style, 144 feet long and 62 feet wide; the tower, which forms part of the old city wall, is now used as an officers room. The hall is the head quarters [plus A, B & C Cos.] of the 4th Territorial Battalion Norfolk Regiment. (Kelly, 1912)

The architect was the City Surveyor, James Benest and the was builder William Gilbert. As Kelly notes, the Drill Hall incorporated a fragment of one of the semicircular towers, demolished 1963. The site of the tower is now marked by a semicircle of cobbles in the Chapel Field Road roundabout.

Among other events, the Drill Hall was used for concerts. For example, on 17th September, 1912, a promenade concert was held for the Norwich Flood Distress Fund.


Cattle Market street
The Drill Hall is used by an architect practice.

The Prince of Wales opening the new Drill-shed of the Volunteers at Norwich, from the Illustrated London News, November 10th, 1866. Enlarge 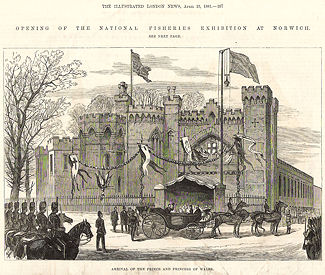 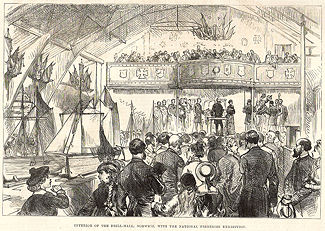