Writing about the Drill Hall, Kelly (1898, 1903) records:
'The Drill Hall, in Queen street, erected in 1868, is a plain edifice of brick belonging to the G and H companies 1st Volunteer Battalion Northamptonshire Regiment and is used for concerts and lectures; it will seat 800 persons.'

The Drill Hall was also the Headquarters of the Northamptonshire Battery [4th East Anglian Brigade] Royal Field Artillery (Kelly, 1910). ) The Brigade was the 4th East Anglian Brigade at the outbreak of war, renamed 272 Brigade in May 1916 and finally 270 Brigade in Dec 1916. The battery was correctly called the Northamptonshire Battery, but known as the Peterborough battery locally.

The picture shows part of the drill hall. Queen Street kinks to the left around the Drill Hall from that direction and so the side of the Drill Hall is visible across the street (where the boy appears to be running away from the camera). The yards behind the Drill Hall were presumably the horse and gun stabling. There was apparently another gate onto Cumbergate straight from the yard.

The Drill Hall was demolished to make way for the Queensgate Shopping Centre.

The Headquarters of 'Northamptonshire Yeomanry (B Squadron) were in St. Leonards road. (Kelly, 1910) However, Kelly 1914 lists Queen street.

Also in St Leonard's road, Kelly (1890, 1898) lists 'Northamptonshire Royal Engineers (1st)Volunteer (attached to 2nd Tower Hamlets); head quarters & orderly room, St. Leonard street.' By 1903, A & B companies are no longer attached. This Drill Hall has also been demolished and its site is the Queensgate Bus Station.

A building called Old Drill Hall on Lincoln Road is home to New Link, a centre which provides advice and support for asylum seekers, refugees and migrant workers. Its exact age is not known, but local memory dates it to the period prior to the Second World War, possibly the 1930s and this seems to be supported by references in the Archaeology Data service.


Thank you to Stephen Beeby for the additional information about the Queen street and Leonard street drill halls and for the illustrations. 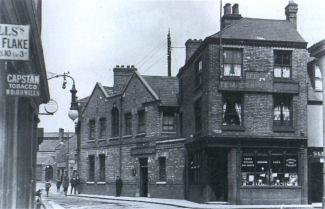 Photograph from 1900 looking into Queen street.

This picture gives a tantalising glimpse of the side of the Drill Hall, visible on the right hand side of the Queen Street at the point where the street kinks (where the boy appears to be running away from the camera). Click here for location plan. 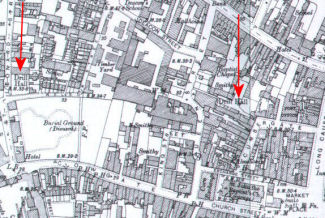