These premises seem to date from two different eras. The original drill hall, on the left, appears to have been extended by the addition of an unsympathetic, plain, functional, two storey building to its right. For the purposes of the project, we have focused on the older part of the premises.

The older building is a single storey building in red brick with stone detailing. Its most striking feature is the elaborate doorway with an oversized key stone. Above this is a cornice, on which rests a parapet with a semi-circular inset. It seems a strange feature with little obvious purpose. .

The drill hall has been boarded up and abandoned. (July 2006). It has been sadly neglected and its plot of land is overgrown with weeds and shrubs. A Planning Notice at the front of the premises states the intention to demolish the drill hall and use the site for dwellings. To date this has been refused, but it is believed that the principle of demolition has been accepted. .

The War Memorial listing the local men who died during the Great War is directly opposite the drill hall in which some of them may well have trained. 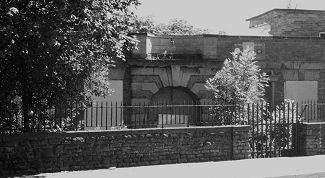