According to Kelly, 1904, B Sqn Sherwood Rangers were based at Dame Flogan street.

The drill hall in Mansfield is marked on the 1917 Ordnance Survey map. It is in the vicinity of, and would have been approached from, Meeting House Lane. Nothing at all remains, as this whole area is now the new Four Season's Shopping Centre.

Kelly's record of a drill hall in Westgate is not substantiated by local records, memory or maps. Any further information would be welcome. .

However, Cromwell House, Westgate was bought and used for military purposes during the Great War. According to the North Mansfield Advertiser, it was the Headquarters of 12th Volunteer Battalion Sherwood Foresters. Originally a private residence, it was bought in October, 1916 and sold in April, 1919. .


The extract from the Ordnance Survey map of 1917 is reproduced by permission of Mansfield Library.

Many thanks to David Crute at Mansfield Library for his help. 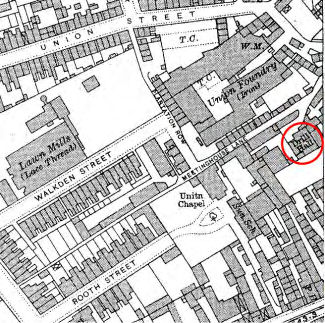 Reproduced by permission of Mansfield Library.
View at larger scale
© All material is copyright - refer to the Terms of Use