Rushers' 1882 Directory of Banbury also lists the Town hall as the home of the C Company Second Oxon Rifle Volunteer Corps. By 1893 the armoury was at the Plough Inn.

The Drill Hall complex in 2007. It is conjectured that
the WWI Drill Hall was the building on the left.

The conjectured WWI Drill Hall has apparently seen much alteration,
including the demolition of an adjoining building and re-roofing. 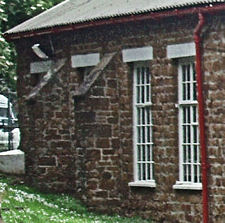 The use of ironstone and ad-hoc
arrangement of piers suggest this is
the oldest of this group of buildings,
and most likely to be the WWI Drill Hall..
© All material is copyright - refer to the Terms of Use