4th Battalion Oxfordshire & Buckinghamshire Light Infantry, head quarters [plus A, B & H Cos.

The Drill hall on St Cross road was Headquarters of the 4th Battalion Oxfordshire & Buckinghamshire Light Infantry, plus A, B & H Companies.


Most of the addresses in the database are merely offices and some are impossible to track down because of street re-numbering. No premises of specific military purpose were evident on New Inn Hall street on a site visit in 2006; indeed, it was almost impossible to identify the building because of the lack of numbering. 8 Alfred St does not exist; number 6 is the last one and is the pub, The Bear. We did not visit St John Street or Paradise Street, but an inspection of contemporary Ordnance Survey maps revealed no evidence of buildings in military use.

Nothing remains of the Drill Hall on St Cross Road. However, it is shown on the 1921 Ordnance Survey map as Headquarters (Ox and Bucks L I). The data for this map was gathered in 1919, so it is reasonable to assume that the Drill Hall was in use in the Great War. The area is now covered by the English Faculty and the Law Library. The Manor Road houses close by are still there. The plot where the drill hall was is bordered by a little river and the rifle ranges would have abutted the river. (Photographs of the immediate vicinity, including Manor road, are available in our records.) Oral accounts on the BBC History website say that the drill hall was use for training in the 1939-1945 War.

According to an article in the Oxford Times, March 1907, the Volunteer Drill Hall on St Cross road was one of three miniature ranges used for practice by the Yeomanry, the University and the City Volunteers. These ranges were adapted for Service Rifles and Morris Tubes and varied from fifteen yards long to twenty five.

The 1900 OS map shows a disused skating rink and a racquet court on the site, with Intrenchments.

Kelly, 1911, also notes that the office of 3rd Southern General Hospital R.A.M.C. was at 20 Magdalen street.


The extracts from the Ordnance Survey maps of 1900 and 1921 are reproduced by permission of the Oxford Local History Studies Library. We are very grateful to the staff for their help. 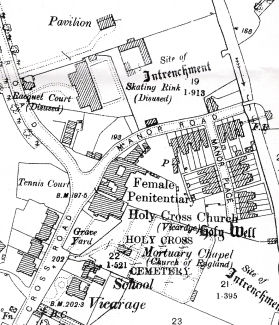 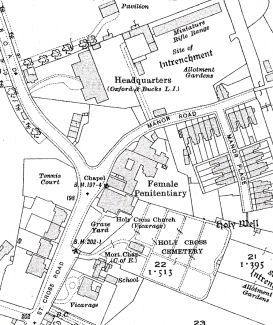