Thame did not have a purpose-built drill hall. but according to The History of Thame, by J H Brown and W Guest, 1935, In 1909. a Company of Territorials was started for Thame, with Dr. Summerhayes as Lieutenant; 15 Thame men, with the Chipping Norton detachment, formed E Company of the 4th Battn. O. and B.L.I.; and tradesmen were forced to release their employees for the annual training so that they could join. There were weekly drills on Thursday evenings in the Spread Eagle Assembly Rooms in winter, and on the Windmill Field in summer, and a training camp in August.

Survivors of the Boer War formed a Rifle Club in 1908 and a miniature range was erected in Park Street. This is visible on the 1921 Ordnance Survey map on the north side of the street almost opposite the Fire Station House, just before the road forks into two.

The rifle range was in use throughout the Great War and additionally drills continued on one evening a week and half a day on Sunday.

Brown and Guest record that the Territorials returned from their annual fortnights training at Shorecliffe at the beginning of August, 1914. On the Tuesday following the declaration of war came the order of mobilisation, and the next day 41 territorials paraded in the Market Place under Sergeant Arnold, and proceeded to Oxford by train. 80 Yeomanry men were sent to Henley. 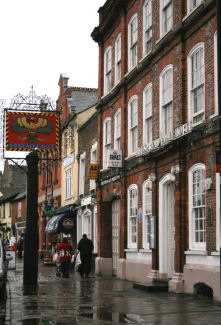