Originally part of the 1st Shropshire Artillery Volunteer Corps, the 1st Shropshire & Staffordshire Artillery Volunteers trained in Church Stretton [1]. Kelly, 1895, reports that there were 63 rank and file. There was a gun platform on the Long Mynd from about 1865 onwards and, by 1883, a carbine range between Stretton House and Brockhurst, south of the town. There was a 32-pound gun in the Lion Yard Drill Hall, but later on, guns were stored in the grounds of Stretton House, the asylum. The houses owner, Lt-Col C W Campbell Hyslop, was a prominent Reservist soldier who is recorded in Kelly, 1895, as commanding the artillery Volunteers (as well as leading the Volunteer Fire Brigade and numerous other activities). Stretton House has been demolished.

A 3-position battery of the Shropshire and Staffordshire Artillery is stationed in the town. (Kelly, 1891, revised by 1895 to read A portion of the second battery.)

A photograph from 1870 shows heavy guns of the Shropshire Artillery Volunteers on the Burway, Long Mynd. Next to the guns, a party of ladies is enjoying a picnic. To enable the South Staffordshire and Shropshire Yeomanry Volunteers to practice, the guns were transported by horse-drawn carts and shells fired across Ashes Hollow to the ranges on Round Hill. Apparently the practice stopped when a local village, Minton, was accidentally shelled. (Information from a National Trust Archaeology Survey, reported on the Discover Shropshire website, which recorded that the site of the gun emplacement was still visible near Townbrook Hollow.)

After the Territorial reorganization in 1908 the gunners stationed at Church Stretton formed half of the Welsh Border Mounted Brigade Ammunition Column, Shropshire Royal Horse Artillery.

A Drill Hall is shown on the 1929 and 1953 OS maps close to the station. It is marked to the east of the station and west of the Methodist Church, on land between Crossways (now A49) and the railway. (Please see map.) We are trying to find out whether the Lion Yard was, in fact, a railway yard.

We understand that the drill hall near the railway station was demolished in the late 1960s.


Image produced from the www.old-maps.co.uk service with permission of Landmark Information Group Ltd. and Ordnance Survey. 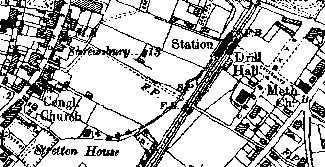