The Drill Hall for the Territorial Force in the Charlton road was opened in 1912, the cost being nearly £4,000. The building comprises a large drill hall, offices for the North Somerset Yeomanry and the C Squadron of the regiment; the left half battery of the Somerset Royal Horse Artillery and half of F. Co., 4th Battalion Prince Alberts (Somersetshire Light Infantry); recreation rooms for officers and men, a bar and a skittle alley and rifle range; there is also a house adjoining for the residence of the sergt.-major of the R.H.A.. (Kelly, 1914)

This building is still used by the cadet forces. The building appears to have at least three wings - similar arrangement to an H block. Behind the main building is what would have been a large parade area and at the back, a stable block which now backs on to the road called Yeomanry Way.

The photographs show front of the building and the side view entry gate.


We are grateful to Malcolm Linham for the information on the current status of the Drill Hall and for the photographs. 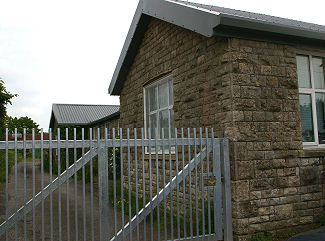 Thank you to Malcolm Linham for the images.
© All material is copyright - refer to the Terms of Use