There was also a drill hall just over the border with Smethwick, at Ninevah Road, which is described under Smethwick.

Handsworth Drill Hall was erected by the Staffordshire Territorial Force Association in Nineveh Road. It was built to accommodate the North Midland Mounted Brigade Field Ambulance of the Royal Army Medical Corps.
The front elevation was faced with Stourbridge bricks with Hollington stone dressings and the building contained a drill hall, officers room, orderly room, stores, harness room and wagon shed on the ground floor. There was a non-commissioned officers room, servery, mens recreation room and kitchen on the first floor and a caretakers quarters on the second floor.

It was opened by Colonel J H Wilkinson on Saturday 25th July, 1914. Major A Goodwin, the commanding officer, presented a key to Colonel Wilkinson when declaring the hall open. In his speech he said that the CA were building twenty drill halls similar to the Handsworth hall at the cost of £60,000.

Thank you to John Gallagher for sourcing the report and illustrations. 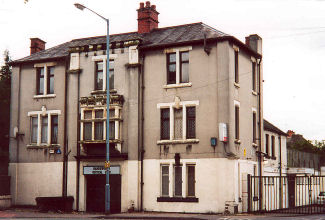 Interior of Belgrave Terrace Drill Hall reproduced from
The Birmingham Weekly Gazette, 1st August, 1914
Enlarged View
© All material is copyright - refer to the Terms of Use