A commemorative tablet to the men of E Company 6 North Staffordshire Regiment was designed and executed for Major C Longstaff by R Bridgeman & Sons and erected in the Drill Hall in 1937. When the Drill Hall was demolished, the tablet was removed for safe keeping to premises occupied by the British Royal Legion in Beacon Street, where it remained until 1983. It was re-sited in the Guildhall, which had served as the headquarters of the company from its inception on the reorganisation of the volunteer forces in 1908. On 13th November, 1983, it was unveiled by George Waters, the only surviving member on the plaque, in the presence of the families of other men.

During its life, the Drill Hall was used by the community. The Lichfield City Band (began 1910) practiced in the Drill Hall on Tuesdays. The Miniature Rifle Club had a range there, which was still in use in September, 1960.

The Drill Hall in Frog Lane was demolished in April 1969.

38 Tamworth Street was the Staffordshire Yeomanry Territorial Headquarters from 1905-1914 and a picture of the building before the frontage was altered in the early 1960s is held by the Historical Monuments Commission in London.

A report in the South Staffordshire Times, February 1914, provides information about the initial work on the Lichfield Dill Hall.

The site was purchased with money collected by Captain W Coleridge Roberts, the commander of the company. Mr A Chatfield of Hanley tendered for the building.

The drill hall and rifle range measured 100 feet by 30 feet. The Order Room was to the right of the entrance, with three other rooms to the left, including a room for NCOs. The lecture room measured 21 feet by 16feet and the Officers room 21 feet by 14 feet. There were Quartermaster stores at the rear.

Apparently it was the first Drill Hall in Staffordshire to have heating installed as it was being built. The total cost of the Drill Hall was £1750.

We are very grateful to John Gallagher, the author of 'Trades of a City - Lichfield Shops and Residents from 1850' for his information and the photographs. 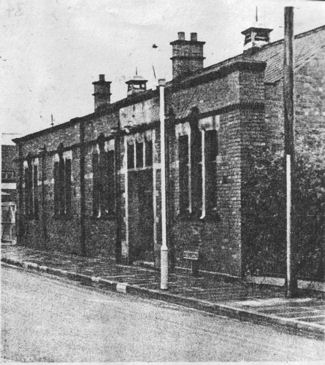 The Drill Hall in Frog Lane, photographed in 1969, shortly before its demolition. Click to enlarge 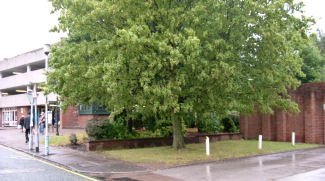 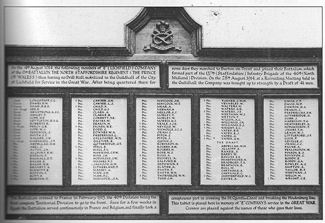 The memorial tablet from the Guildhall that stood in the original Drill Hall until 1969. Click to enlarge.
Thank you to John Gallagher for these photographs.
© All material is copyright - refer to the Terms of Use