The Headquarters, A and B companies of the 6th Battalion South Staffs were based in a fine drill hall in Stafford Street, Wolverhampton. Described in Kelly 1912 as:
'the head quarters of the Infantry Regiment, in Stafford street, erected at a cost of about £8,000, form a considerable pile in an Early Gothic style, from designs by Mr. Daniel Arkell, architect, of Birmingham, and have a central tower; the Stafford street block contains on the ground floor an orderly room, adjutant's room, armouries, stores for clothing, waiting rooms and lavatories; on the first floor are two large assembly rooms, with ante-rooms, sergeants' mess &c. and on the second floor are kitchens, stores and caretakers' rooms. The drill hall is 184 feet long and 76 feet wide, and has a stage at one end and a gallery at the other, and is provided with cloakrooms and lavatories; in the basement are stores for baggage &c. and a heating apparatus.'

There is further reference to premises in Cleveland road for the Ammunition column. 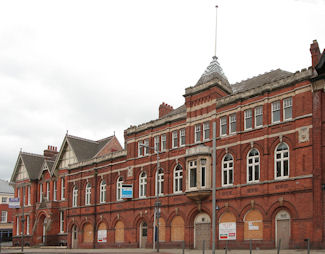