Thorp Street drill hall in Birmingham is now a car park, having been deprived of its roof. It was opened on 2nd November 1881 by the then Mayor, Richard Chamberlain.

The 1st Volunteer Battalion, the Royal Warwickshire Regiment had, for the previous twenty years, been based at the Bingley Hall in the city. The unfortunate lease of this building to a circus for three months prompted the search for more permanent premises. The Thorp street site was offered on a 99 year lease at half rent by the landowner, the Rev. G. Inge, and a limited company of £5,000 capital formed. The battalion invested £1,000 from the Bazaar Fund; the officers contributed £1,000, and the balance raised within a few days. The battalion moved into temporary premises in Graham street for the next two years.

Captain F.C. Osborn, who was one of the citys leading architects, designed the building following extensive visits to similar premises. Originally built to accommodate twelve companies, later extension increased its capacity to 2,000 men. It was decided at this time that no preparation should be made for letting it as a place of entertainment.

Described in Harts history of the 1st Volunteer Battalion, the headquartersare probably the most spacious and complete of their kind in the kingdom, and have been declared by general officers and others who have visited them to be a model of Volunteer barracks. The large hall is 250 feet long, 80 feet wide and 45 feet high, and is spacious enough to allow the whole of the eighteen companies at their full strength of 2,000 men to muster at the same time.

It is covered in one span by a roof of iron and glass, and though no money has been wasted in decoration the general effect is a handsome and well-proportioned hall. To avoid the noise occasioned by the trampling of many feet, the floor is formed of rolled clinkers, which, as the hall is used solely for military purposes, has been found to answer its purpose admirably.

The whole of the space on the side next to Thorp street is covered with substantially erected buildings used in the administrative work of the battalion. These buildings consist of a comfortable caretakers house, and on the ground floor, of the main building are the orderly room, adjutants room, secretarys office, a complete armoury for each battalion, kitchens, store rooms, and a mens canteen and recreation room.

The quarters for officers are on the first floor, and they take a legitimate pride in their spacious mess room with open timbered roof, and their comfortable and home-like ante-room adjoining.
Adjoining the officers quarters are the very large and comfortable sergeants mess, corporals mess, signallers room, band room, a number of committee rooms, and the ambulance room.

It was extended towards Hurst street in 1893, built to plans by Major F.B. Osborn. The extension was to comprise stores, committee rooms, new sergeants mess &c. but the cost of this was prohibitive. Fortunately the works continued, funded by the £5,000 bequest of a local businessman, James Stevens. 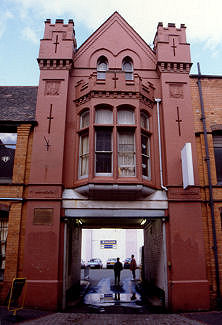 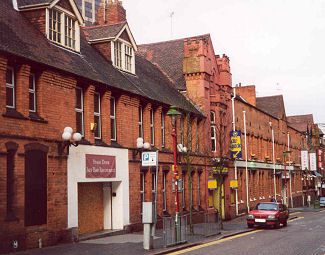 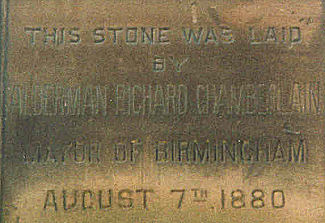