The new Drill Hall on Boundary Road, Fort Pitt was described in detail in the Chatham Observer here. The building included an entrance hall, wide plus separate entrances for sergeants, men and caretaker, Adjutant's room, orderly-room, Colonel's room, Officers' dressing room, offices and armoury. The Sergeants' room was fitted with a private bar and a lavatory annexe. On the opposite side was the men's recreation and reading room, with its own bar and a lavatory annexe.

The drill hall itself was a spacious and airy hall with an open timber roof and measured 70 feet by 120 feet.

In the basement was a band room, Quartermaster's store, coal cellar, ammunition store, machine gun and ambulance room, a beer, wine and spirit cellar with a lift to the bar in the men's room.

The structure of the building is described in the newspaper piece. It was built in the Hennebique system of ferro-concrete construction, which arrived in Britain in 1897 and thus may have been one of the earliest examples.

The new Drill Hall was financed entirely by the local community and cost £8358. Its foundation stone was laid by Lord Roberts on 27th July, 1903 and the building was opened by Lord Methuen in May 1906. Methuen's speech draws attention to resentment at the "immense sums of money [locally] being spent on the Navy and immense sums being spent on the Army for the better housing, better feeding, better clothing, and for the better pay of the Navy and Army." By contrast, "the Volunteers did not get any pay, and this was their little effort to house themselves so that they might make their men more comfortable in their little pleasures, and utilise the fine hall in which they were assembled for the purposes of drill and for making themselves more efficient."

The Drill Hall was demolished in February,1933, just thirty years after it was founded with such immense pride. 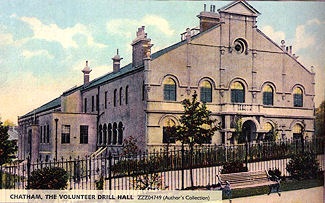 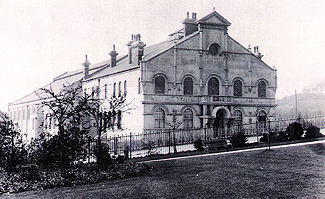 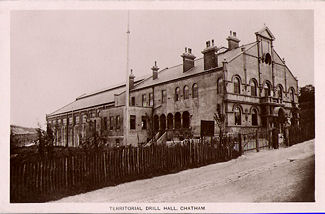 Read the report of the opening Drill Hall, here 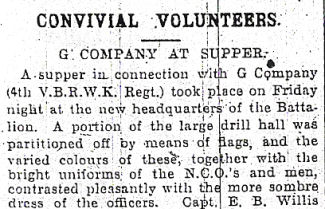 Read about a Dinner held in the new drill hall, here.

Read the report of the laying of the foundation stone here.
© All material is copyright - refer to the Terms of Use