All references Kelly,1912, unless otherwise attributed.

A selection of information about Beccles volunteer soldiers from 1860 onwards can be read here.

Market Place: a Beccles newspaper repoterd the inspection of Rifle Volunteers at the Drill Hall, Market Place. We would welcome any information about this Drill Hall.

The site which eventually housed the Drill Hall at 16, Peddars Lane was offered for sale in 1875. It included workshops and residences and became the Vulcan Ironworks. It was sold again in 1892.

By 1901, the Beccles Almanack reported that, A handsome and commodious drill hall, for the use of the Artillery Volunteers, is nearing completion in Peddars lane.

Evidence that the Drill Hall in Peddars Lane was modified included a report of the Sanitary committee in 1925. The council accepted the proposed alterations to the Drill Hall, including doors which would open up the front of the premises, to be paid for by the War Office. (East Suffolk Gazette, February 9th.)

The Drill Hall was occasionally used by the community. The East Suffolk Gazette describes a Workhouse Treat, which included free admission to the circus and tea afterwards in the Drill Hall.

The Drill Hall on Peddars lane has been considerably altered and developed. It is hard to see many signs of the original building. However, on close examination, it is just possible to see what appears to be a stepped gable surmounted by a finial. The gable appears to be penetrated by a circular window divided into four quadrants by keystones above which there seems to be the remains of a fixture for a flag pole.

We would be grateful for any information on what lies behind the facade. 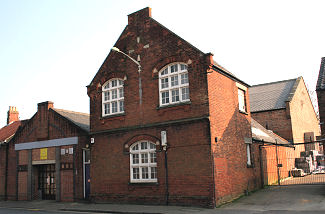 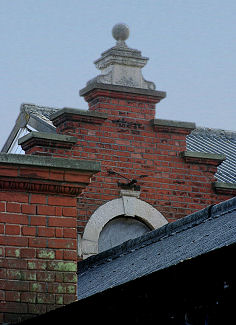